Hey Everyone, Happy Holidays. Thanksgiving has past and we are on the home stretch for the Christmas season and the end of the year. Something everyone is hoping to lead to a better new year. Okay today we add two new racing prints. I have combined a couple racers into a combo prints showing close up Air Racing.

The first print I call Power Sport. It combines the two powerhouse racers in the Sport class, a Super Glasair II, Race 39 flown by Jeff LaVelle, a multiple National Champion and One Moment, a Super Legacy Lancair flown by Andrew Findlay. One Moment has the distinction of braking the 400 MPH mark for the class. This would put her in the mid to upper level of the Unlimited class. Quite impressive for a home built racer powered by a 6 cylinder race engine. The Sport Class is probably the future of air racing. Reno Sport Class.

The next new print combines to rivals in the T-6 class. Miss Ellaneous and Miss Humboldt Hunny. Miss Ellaneous is an SNJ, raced by Bill Muszala, while Miss Humbolt Hunny, race 73, is a T-6G. Both of these aircraft seem to battle all week finishing either one two in their heat races. Sometime trading places at the finish. Miss Humboldt Hunny flown by Ralph Rina finished the 2019 races winning the Bronze race. Just a reminder I have individual prints of all these aircraft available in the racer section of this web site.

We have added several new poster style versions of our Air Racing caricatures. Please check them out in the air racers section. I think they are very cool and look like vintage racing posters. I am looking into the possibility of creating garden flags so fans can display their favorite team./ racer.

We have also added a new Formula One racer the Cassutt IIIM, Sleeper. (see above) This air racer is owned by Josh Phillipson (who also owns and pilots, No Strings Attached) and piloted in 2019 by Des Hart. There are three versions, out regular profile, a version of Sleeper crossing the home pylon, and one of the new racing strip series.

Today we added a few new caricatures. Two custom commissions, a C-130H with MAFFs firefighting gear, and a Cessna 182. We also added a new air racer, Ed Weiner’s, Bardahl Miss from 1968 Reno Air Races. This is one of my favorite racers, and I even did a regular profile back when I was air brushing some art. I hope to do a couple other versions of his pylon racer, the early bronze color and the wild tiger strip version. I might add those two to my regular side profiles. Reno is just a few months away so I hope to get out a few more racers.

Here are a couple of RV-8 Sport Class racers from this years Reno Air Races. I think the Sport Class will be the class (with F1 a close second) that will keep Air Racing going well into the future. The warbirds that everyone loves are just to rare these days and to costly to race regularly. I still love the unlimited class but time is the enemy of the big iron. 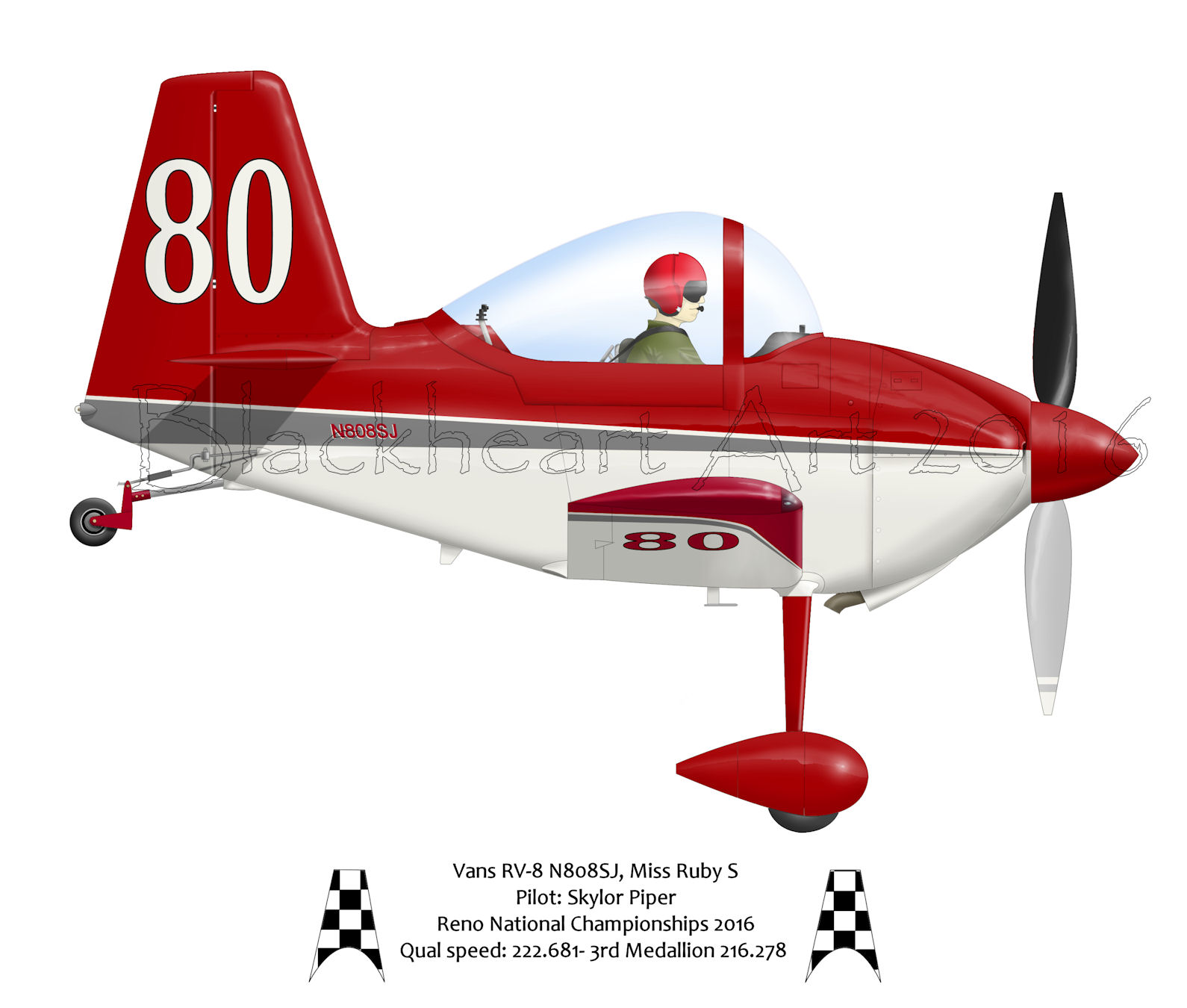 Happy Fourth of July to all my customers, friends family and fans. Hope you have a great holiday and enjoy a bit of American BBQ and fun.

Okay for this Fourth OI put together a really cool print with the Blue Angles and Thunderbirds combining to salute to the good old USA. Prints are 12×17 and we can also do prints on Metal in various sizes. judging by the 20×30 sunset print I had done on metal this one will look awesome.

Next up, while I as at it this weekend I I added another Air Racer, this time from the early days of Reno and air racing in the 1960’s The P-51K “Little One” racer by Lyle Shelton. Yes the same Lyle Shelton that flew the Bear to so many Championships. The was his first taste of Air Racing. He flew this Mustang owned by Richard Vartanian. Later this racer would become “Tonopah Miss” and carried race 12, in the 64 and 65 Reno Air Races. 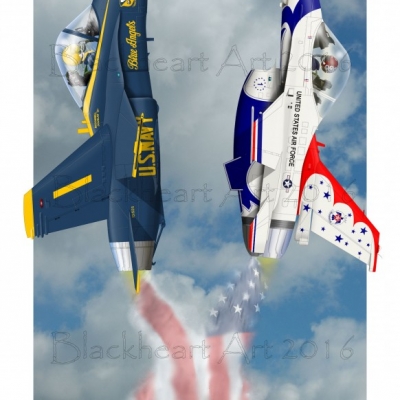 Okay there you have it the newest caricatures. Have a great Fourth!

Finally we have new caricatures to add to the site. It has been awhile and we have a few additions for you.

First up is a new A-4C from VA-146 Blue Diamonds. This caricature is a commission for a gentleman the served with VA-146 in 1967 and was awarded the DFC for actions against river patrol boats. The mission was tasked with locating and destroying some patrol craft in the Red River Valley. LT(jg) Jeffrey Kral located, and destroyed a patrol boat while under accurate, continuous automatic weapons fire. He was awarded the DFC for the Aug, 12th Mission.

It was a pleasure working with Mr Kral to create these caricatures. One includes the DFC Certificate and the Citation faded over a background of a river area. The other is the usual side profile.

Next up is a EA-50 Eclipse Business jet. This particular aircraft was flown by my nephew for his new job. He was checked out in the aircraft in Scottsdale so we added a IFR chart and a heavy cloud background. We also did a version with a photo my nephew took while flying the aircraft. I thought that a perfect background. We also have a few other backgrounds we were contemplating. If you want to see then check out our Facebook page.

Next up is a couple of Air Racers, both from the T-6 class. Miss Everything, and the 2014 and 2015 National Champion Midnight Miss III. Miss Everything was flown for many years by Ralph Rina a two time National Champion in the bird. Miss Everything since changed owners a few times and won more Championships, and is still racing at Reno. Midnight Miss III is the current two time champion. The caricature of Midnight Miss is sort of a work in progress. I need to get a few detail pictures to add some of the text and details on the rights side. I think there is a pin-up art work near the name but have not seen a good picture of it so I can recreate it for the caricature. Plus crew names and some sponsor information on that side. If you have any pictures to share so i can add the details shoot me an email.

Last but not least is a new addition to my “Sunset Series”. This time the F-4E. So far we have the F-14 and F-16 caricatures with sunset backgrounds, and we hope to add more in the future. This art work received a lot of feedback on our Facebook page. So check it out and let us know what you think.